Tuesday we return to Westward Expansion
Chapter 11 Lesson 4
Westward Trails, California Gold Rush, and the building of the Railroad
Not included in the Text book but we will be learning this standards is now the inclusion of the Battle of Little Big Horn and the extermination of the Buffalo...thus ending the native Americans way of life for good. 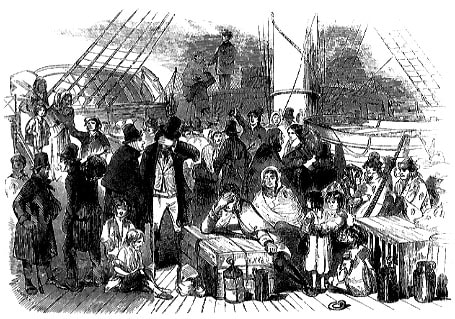 From the 1820s to the 1840s, Germans and Irish were the two largest groups of immigrants to the United States. In the middle half of the nineteenth century, more than one-half of the population of Ireland emigrated to the United States. So did an equal number of Germans. Most of them came because of civil unrest, severe unemployment or almost inconceivable hardships at home. This wave of immigration affected almost every city and almost every person in America. From 1820 to 1870, over seven and a half million immigrants came to the United States — more than the entire population of the country in 1810. Nearly all of them came from northern and western Europe — about a third from Ireland and almost a third from Germany. Burgeoning, (begin to grow or increase rapidly) companies were able to absorb all that wanted to work. Immigrants built canals and constructed railroads. They became involved in almost every labor-intensive endeavor in the country. Much of the country was built on their backs.

In Ireland almost half of the population lived on farms that produced little income. Because of their poverty, most Irish people depended on potatoes for food. When this crop failed three years in succession, it led to a great famine with horrendous consequences. Over 750,000 people starved to death. Over two million Irish eventually moved to the United States seeking relief from their desolated country. Impoverished, the Irish could not buy property. Instead, they congregated in the cities where they landed, almost all in the northeastern United States. Today, Ireland has just half the population it did in the early 1840s. There are now more Irish Americans than there are Irish nationals.
In the decade from 1845 to 1855, more than a million Germans fled to the United States to escape economic hardship. They also sought to escape the political unrest caused by riots, rebellion and eventually a revolution in 1848. The Germans had little choice — few other places besides the United States allowed German immigration. Unlike the Irish, many Germans had enough money to journey to the Midwest in search of farmland and work. The largest settlements of Germans were in New York City, Baltimore, Cincinnati, St. Louis and Milwaukee.
With the vast numbers of German and Irish coming to America, hostility to them erupted. Part of the reason for the opposition was religious. All of the Irish and many of the Germans were Roman Catholic. Part of the opposition was political. Most immigrants living in cities became Democrats because the party focused on the needs of commoners. Part of the opposition occurred because Americans in low-paying jobs were threatened and sometimes replaced by groups willing to work for almost nothing in order to survive. Signs that read NINA — "No Irish Need Apply" — sprang up throughout the country.

While America was undergoing an "era of good feeling" there were many problems lying under the surface. These social ills were attacked many social reformers.
Cause: The Second Great Awakening makes people want to change society for the better. Effect: Reformers work to end slavery, end problems caused by drinking alcohol, and work towards equal rights for women.

This reform movement was led by people who believed that America could do anything if she put her mind to it. Major reform movements existed in the following areas:

B. Temperance
1. The temperance movement was an attempt to eliminate the evils of alcohol. Mostly the same women involved in the women's rights movement . Led by the American Christian Temperance Union they sought to save the American family by trying to get alcohol declared illegal.
2. They were successful in getting some states to adopt state constitutional amendments banning alcohol.
3. This movement continued until the passage of the 18th amendment in 1920. Francis Elizabeth Willard was president of the Woman's Christian Temperance Movement
http://www.ducksters.com/history/us_1900s/prohibition.php

C. Education
1. Led by Horace Mann, the great educational reformer, a movement was led to create mandatory public education in America. It was eventually successful.
https://www.biography.com/people/horace-mann-9397522