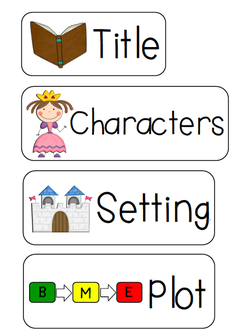 ELAGSE4RL3: Describe in depth a character, setting, or event in a story or drama, drawing on specific details in the text (e.g., a character’s  thoughts, words, or actions).


What is a narrative? A narrative is a story. What are elements? Elements are parts of a whole, so narrative elemnts are just story parts. The main narrative elements are:Narrative Text:
Broadly defined, narrative text tells a story. It is found in the form of short stories, folktales, tall tales, myths, fables, legends, fantasies, science fiction — even in the reporting of news stories or in biographies and autobiographies. The narrative structure most often features a beginning, middle, and an ending. It most often also features clear story elements, or story grammar, including:http://www.google.com/url?sa=t&rct=j&q=&esrc=s&source=web&cd=1&ved=0ahUKEwj2rqmdj5vWAhXF7yYKHUGRDiQQFggoMAA&url=http%3A%2F%2Fclassroom.brenhamisd.net%2Fusers%2F0234%2Fdocs%2Fstoryelements2.ppt&usg=AFQjCNHm407XgH2RG4T855b-gGAiKXv-cA

Other Narrative Elements to Think About...
Characterization:  the methods used to present the personality of a character in a narrative.
Direct--the author describes the character.
Example--She was a large woman with a large purse.
Indirect--the reader judges what  the character is like based on what they say or do, or what other characters say about them.

Atmosphere:  the general mood or feeling established in a piece of literature. Atmosphereis created through word choice and pacing.

Word Choice--the author uses words that make the reader feel a certain way.
Pacing--the author controls the speed at which we read through sentence length, punctuation,                  repetition of words  and other techniques.

Point of View: who is narrating the story (2 main types: First Person, Third Person)
First person:the  narrator uses "I" to tell  the action, and is involved in the story.
Third person:the story is told from a  perspective outside the story.The characters are
referred to by name, or as he, she or they.

Conflict: the central  problem that drives the action of a story.(two main types)

Internal:The conflict happens in a character's  mind.A character with a guilty
conscience is an example of internal conflict.

External:The conflict happens between characters, or  between a character and some
outside force, like nature.Sherlock Holmes pursuing a criminal is an example of external conflict.