Mrs Lorber's Homepage
ELACC4RL6: Compare and contrast the point of view from which different stories are narrated, including the difference between first- and third-person narrations. 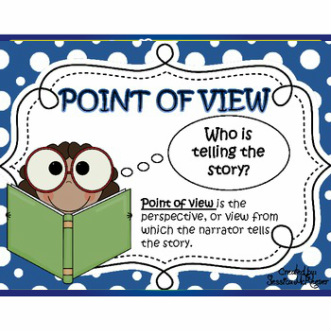 Point of view refers to the person who is telling the story or “speaking.” When you write a letter, you are writing in “first person,” which includes the words I, me, my, we, and our. Second-person writing occurs when the author talks about you and yours, and third person includes the words he, she, they, his, her, and their. In third-person writing, the author does not put himself in the story.
*A story can be told from different points of view.
In first person, the main character tells the story.
When my family moved to the big city, I was excited about all of the new activities we could try. I never thought about how crowded it might be. Back home, my neighbors were very friendly. It seemed like I knew everyone in the whole town. I wanted to make new friends in the city, but when I got to school the hallways were so packed I could hardly get to my classroom. I  took a deep breath and thought to myself, “With all of these people around, I am sure to make new friends.”

In second person, the story is told as though it is happening to you.
You love to work in the garden. You especially like seeing the tiny plants first appear through the dirt. Although it is hard to wait, you know that it is better to wait until the plants are fully grown before pulling them up. Your brother is so fond of tomatoes that his mouth begins to water even before they are red. At summer’s end, you gather seeds to plant for next spring. You rejoice at the cycle of nature.

In third person, a narrator tells the story as if she is watching it happen.
Marcus’s family had just moved to a large city from a very small town. He was surprised at how many cars were on the street and how few people said hello when he met them on the sidewalk. In his old town, he had known everyone. He hoped that he would make a new friend on the first day of school. When he saw the crowded hallways as he walked into the building, he felt worried. Then, he thought to himself that with all those people around, he was sure to make a lot of friends.
Third Person Limited: Narrator knows thoughts and feelings of one character.
Third Person Omniscient: Narrator knows thoughts and feelings of all the characters in the story. 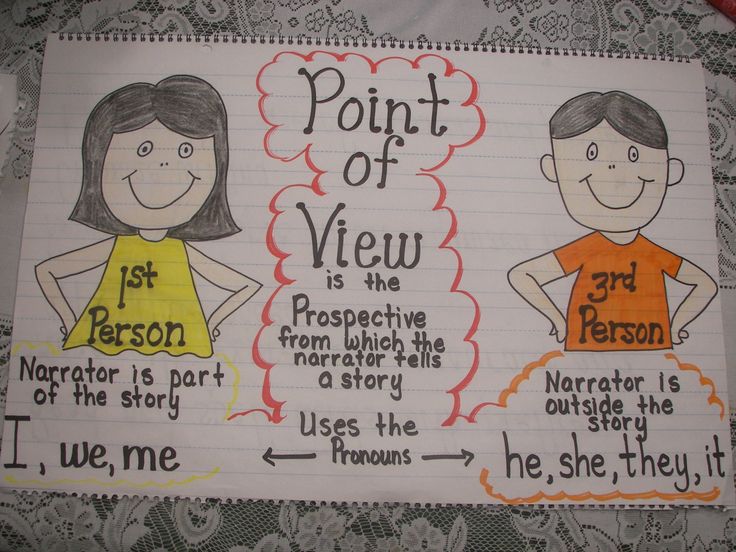 Point of view for Fourth Graders from gherm6
Practice:
http://www.studyzone.org/testprep/ela4/o/pointofviewl.cfm
http://www.internet4classrooms.com/common_core/compare_contrast_point_view_from_which_reading_literature_fourth_4th_grade_english_language_arts.htm
http://www.brainpop.com/english/writing/pointofview/preview.weml
ELAGSE4RL6: Compare and contrast the point of view from which different stories are narrated, including the difference between first- and third-person narrations.

Point of view refers to who is telling or narrating a story. A story can be told in three different ways: first person, second person, and third person. Writers use point of view to express the personal emotions of either themselves or their characters. The point of view of a story is how the writer wants to convey the experience to the reader.